From the leaning tower of Pisa, to the medieval skyscrapers of San Gimignano, to the history of Lucca and Volterra, to the wine regions of Bolgheri and Chianti, to Castiglioncello, the pearl of the Tyrrhenian Sea: in Tuscany, every town is special.

From Le Vignacce, explore the amazing and historical towns of the region and experience the culture that has made Tuscany one of the most famous and envied regions in the world.

Our small guide to the towns in the area.

Winelovers pay attention!! If you want to combine nature and the sea on your holiday in Tuscany, then the small town of Bolgheri, which is only 30 km from Le Vignacce and only a few kilometres from the coast, is the right place for you. If you love wines you will also get your money’s worth in the town and its surroundings, as some of the best wines in Italy are produced here, according to popular opinion. A delightful town for a wonderful day trip.

The town of Castiglioncello, about 15 km from Le Vignacce, is called the ‚Pearl of the Tyrrhenian Sea‘ and rises on a charming hill surrounded by pine trees and marked by steep cliffs towards the sea. The coves and rocky reefs around Castiglioncello are also particularly noteworthy.

Away from well-known tourist centres, on one of the gentle hills in the Val d’Elsa, lies the small town of Certaldo, about 40 km from Le Vignacce. A rack railway connects the higher situated historical centre „Certaldo Alto“ with the lower situated „Certaldo Basso“, which was originally only the market place of the twin municipality. Nowadays, Certaldo Basso has become modern and its inhabitants benefit from industry and a thriving agricultural economy. The historical part, with its red brick houses dating back to the 10th century, boasts remarkable sights: the Casa del Boccaccio, the church of Santi Jacopo e Filippo, the Palazzo Pretorio, from which there is an impressive view over the hilly landscape and the Elsa Valley, as well as the Casa del Boccaccio, the Palazzo Pretorio or the Museum of Sacred Art are true gifts for the eyes.

Florence, the place where the Renaissance lives, is hardly in danger of being overlooked, but despite its many visitors, it is definitely worth a trip and shows its economic, political and artistic importance, which goes back many centuries, at every turn. The artistic and architectural heritage of the city, which is only 60 km from Le Vignacce, is without doubt unique. If you can get away, don’t miss out on taking a look.

Lucca is the ‚hidden treasure‘ of Tuscany. The old town of the city, located about 75 km from Le Vignacce, is surrounded by a four-kilometre-long city wall that can not only be admired but also hiked. Equally worthwhile is a ride on a 4 or 6-seater bicycle along the city wall and in the old town, which is closed to regular car traffic. Walking through the winding alleys of this, you reach the city’s landmark, the 44-metre-high ‚Torre Guinigi‘ tower, on whose viewing platform stately trees grow – a thoroughly remarkable sight. In addition to such features of the city and the generally impressive architecture of the town, Lucca is also a perfect destination for a shopping tour: the pedestrian zone Via Fillungo, enclosed by historic buildings, houses many small but fine boutiques, delicatessens, restaurants and bars that make shopping a real pleasure.

Pisa, which along with Florence is probably one of Tuscany’s greatest showpieces, is also only about 30 km from Le Vignacce and, like Florence, certainly worth a trip. While the leaning tower and the church of Santa Maria Assunta are certainly worth a look, it’s the overall appearance that makes the city so special. Our tip: If you find the time, don’t rush straight to the famous sites, but first stroll through the winding alleys so typical of Pisa to get a first impression of this special city. This is the only way to experience the lively student city from its most beautiful and authentic side. Watch the colourful hustle and bustle of the inhabitants and enjoy the Italian attitude to life. However, don’t be surprised if the city seems to be deserted during your visit – you will most likely be there during the semester break. Only then will you realise that young students make up the majority of Pisa’s inhabitants. After you have checked out the sights that are important to you, you should simply let yourself drift through the streets and the magnificent, original old town of Pisa, take an evening walk along the Arno River and stroll through the beautiful Piazza dei Cavalieri and Piazza Garibaldi, for example. It is above all the little things that delight the eye here. Enjoy la Dolce Vita, the sweet life in Pisa – add a delicious pizza or a typical Italian pasta dish and a fresh gelato for dessert and your stay is perfect.

You don’t need a time machine for a trip to the Middle Ages at Le Vignacce. A short drive is enough to reach the town of San Gimignano, barely 40 km away, where no structural changes have been made since a decree by the duke of the time in 1563. The townscape is characterised by 15 high, so-called family towers, which are the result of the medieval competition of the most powerful families for the highest tower and rise up to 54 metres into the air. It is not for nothing that the town is also called the Manhattan of the Middle Ages.

Siena, which is about 65 km from Le Vignacce, is not considered one of the most beautiful cities in Italy for nothing. It has a medieval character and buildings in the style of the Italian Gothic and, in particular, a particularly impressive old town as well as countless sights, such as the Cathedral of Siena, the Palazzo Pubblico and numerous basilicas. For an impressive panoramic view, head for the Torre del Mangia, but beware: if you’re afraid of heights, you probably don’t belong here.

If you can find the time, you should not miss the small town of Volterra, about 60 km from Le Vignacce, because Volterra reflects the entire history of Tuscany. For example, here you will find the remains of an Etruscan city gate, which is over 2400 years old. The two stone heads on the side pillars of the gate make the passage of time palpable, as they are so badly weathered that you can hardly make out their faces. The Roman amphitheatre and the thermal baths were built around the birth of Christ. The cathedral, the „Palazzo Pretorio“ and the „Torre del Porcellino“ prison date from the 12th century. A little tip: The bell tower of the central Palazzo dei Priori, decorated with medieval frescoes, offers a panoramic view of the city. A very special thing is the Volterra Cathedral. This impresses with a marble entrance and a gilded coffered ceiling. Nearby are also the remains of the Etruscan acropolis. Those who want more history can marvel at an extensive collection of archaeological finds in the Museo Etrusco Guarnacci or visit the ruins of a 3rd-century thermal complex located below the Roman Theatre. 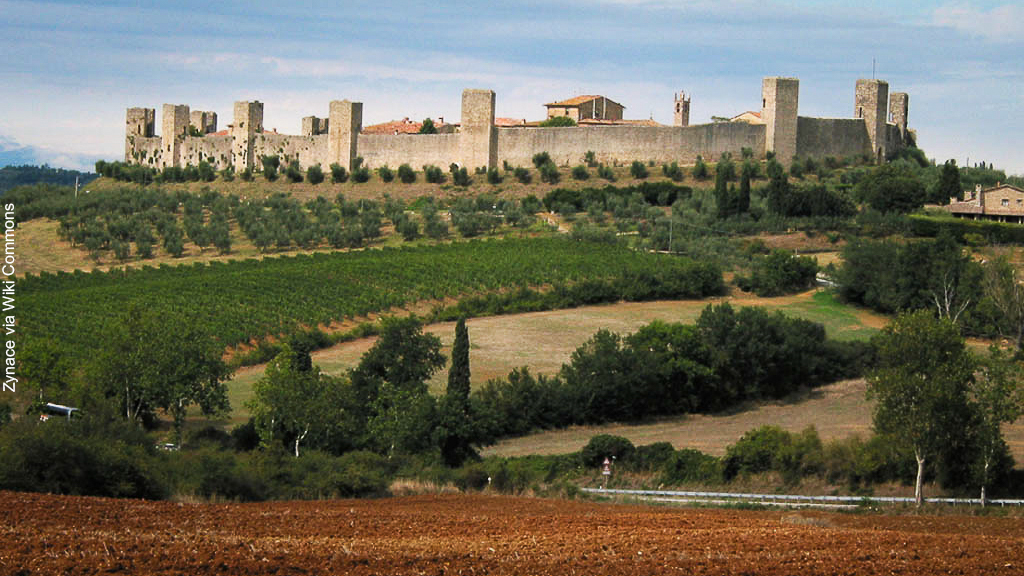